Walking The Tightrope: a review of 'City Of Circles' by Jess Richards 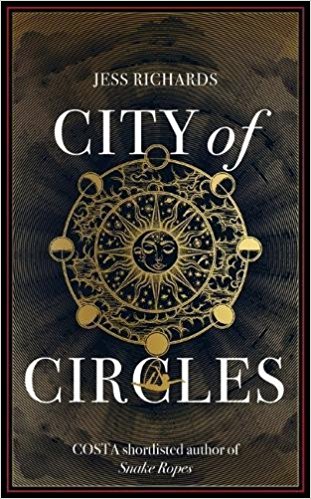 I'm a big fan of Jess Richards' work, having loved her two earlier novels "Snake Ropes" and "Cooking With Bones". Like those stories, "City Of Circles" creates a powerfully original fantasy world through which the author can explore very human emotions.

As she points out in the book's afterword, "perhaps all fiction in in some way autobiographical." Written while the author was going through a period of isolation and transience after the breakup of her marriage, "City of Circles" is about a circus performer called Danu whose grief and guilt over the death of her parents has caused her to withdraw emotionally. With the help of older mentor Morrie, Danu learns to walk a tightrope - both literally and metaphorically - between her desire to belong and her need to find something authentically her own.

Rejecting the camaraderie of the circus and the chance of a lasting relationship with Morrie, she eventually goes in search of herself within the strange geometry of Matryoshka - a city that reads like a puzzle, designed by a visionary architect out of three concentric circles built over a slumbering volcano. The metaphor is a powerful one, and casting herself adrift on the city, she tastes experience after experience - all of which only serve to underline her outsider status. Armed only with a clue from her dead mother's locket, she must search for the missing piece of her identity and put an end to her isolation.

Meanwhile, lovelorn and lonely, Morrie tries to reach Danu - both physically and then mentally, when he learns to travel the ether in a dreamlike state to watch over her from a distance. The concept of the ether permeates the book, drawing on fringe science as much as folklore to establish the idea of a field or a fabric of which the universe is made and through which consciousness can move. It's an idea which is also explored in various ways within science fiction, fantasy and magic realist narratives, from Philip Pullman's His Dark Materials trilogy to Christopher Nolan's film Interstellar (2014) and the new Star Trek TV series, Discovery.

The novel riffs on notions of duality and reflection; from Morrie and Danu’s circus act in which they mirror each other’s movements, to the painting Danu discovers which is an impossible depiction of her by someone she’s never met. The strange geography of the city is also beautifully realised - recalling both Venice at carnival time and a clockwork Minas Tirith. Some time into her stay, Danu discovers that the circles on which it is built slowly revolve at different speeds, making it seem even more like a puzzle to be solved rather than a landscape to be explored. Why is the second circle so different in character? Why is it impossible to gain access to the secretive Inner Circle, and why did her mother have the address of someone who lives there? If she does gain entrance, will she be able to get out again? The answers to these riddles may serve to release Danu from her self-imposed isolation - or they may cut her off forever from the world, and the people, she knows.

Perhaps that's the conundrum that faces every artist - whether to stay in the everyday world where you may be alienated but at least you feel safe, or follow the white rabbit down the hole and face the unknown. In this memorable fable, Jess Richards expertly projects these very human challenges onto a world which despite its complex artifice, always feels vividly real.