The lenticular image of the face and skull of Alexander McQueen which now hangs on my living room wall is impossible to adequately reproduce on the internet.  Perhaps that's the point; endlessly morphing according to your viewpoint, catching the light, playing with the borderlines between life and death, one thing and another. 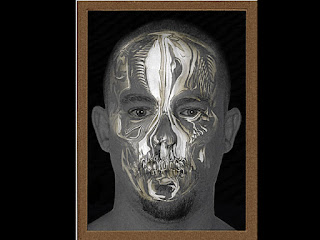 That's the feeling I was left with after visiting the V&A's recent exhibition of his work, Savage Beauty.  Unusually, I read every single word of the weighty £25 catalogue I came home with; lingered over every image, savoured every impression of the many contributors who shared their insights into his visionary collections.

McQueen was much more than a fashion designer.  To describe him that way is almost an insult to an artist whose work touched on elements of sculpture, performance, installation and theatre. Like the shifting skull, he moved between meditating on aspects of death and decay and vivid celebration of life; always on the borderlines, playing with the edges of viewpoint and consciousness, showing us how one thing can be two things, how a moment can morph and mutate into another. 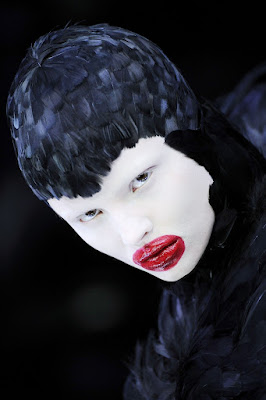 Savage Beauty showed us women becoming birds; clothed in feathers like the swan princesses of ballet, yet unenslaved, beyond good and evil. Women becoming reptiles or horned goddesses; women becoming aliens.  It showed me a world of pure imagination, of self-actualisation where a face might be masked, but a thought could become visually and vividly real. 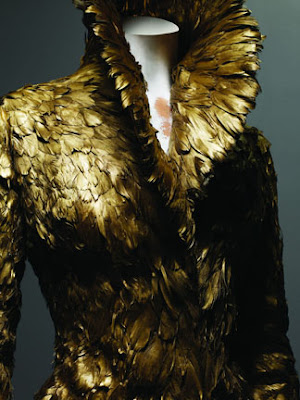 Although McQueen was criticised by the myopic who found his extremes misogynistic, the models who worked with him felt liberated and empowered by his visions and the personae they explored through wearing them.  As Erin O'Connor recalls, "He deconstructed the idea of what a woman should look like...the roles that I played, whether they  were dark, or mysterious, or triumphant - they were always empowered...and he was the enabler. I think he had a real love of women in that sense."  In his eyes even martyred figures like Joan of Arc became victors, writhing in ecstatic transformation inside a ring of fire, wearing a crimson beaded dress which flowed like blood. 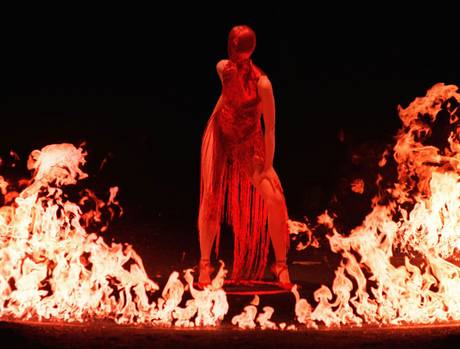 The pleasant-feather gown from 'The Widows of Culloden' collection breathed subversion; a shimmering genius loci which belied the image of the Highlands as an elaborate game reserve for the wealthy. It is eternal, unsubmissive, a goddess gowned in the substance of flight, crowned with a [literally] winged victory headdress. Although less controversial than his earlier 'Highland Rape' collection, which expressed a visceral disgust at the atrocities of the Clearances, there was still an underlying anger - a sense of continuing resistance to what colonial Scotland had become, "marketed the world over as haggis and bagpipes", as McQueen said. 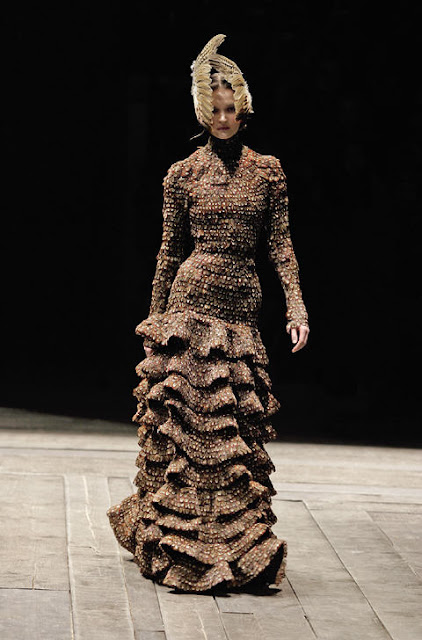 The sense of a talismanic power beneath the surface, of change waiting to happen, was central to his work. Antlers might sprout from a bride's head, tearing the antique lace of her virginal veil. Human hair was sewn inside the linings of his earliest collections. Worms were pressed like flowers inside a transparent bodice, prefiguring death and decay to come. 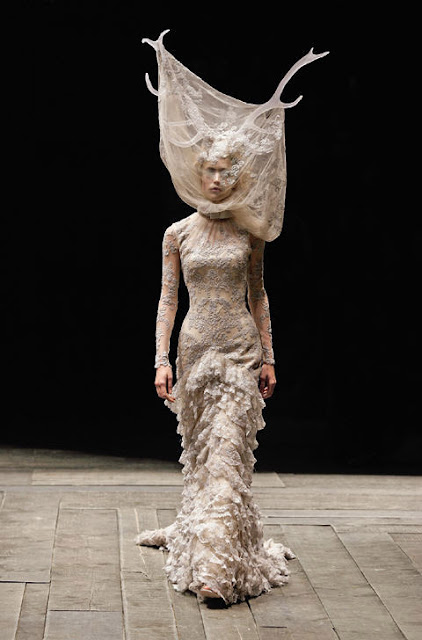 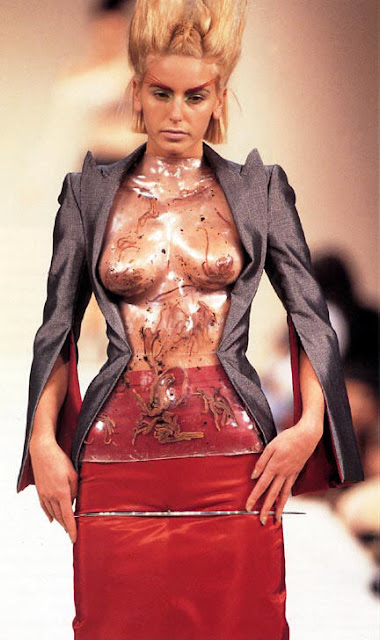 In one memorable moment during the disturbing and surreal 'Voss' show, model Erin O'Connor ripped at her gown of razor clam shells, bloodying her hands as she destroyed a dress which had been itself inspired by the transience of landscape.  The models' bandaged heads suggested surgery - to "change the way you are, as McQueen hinted. 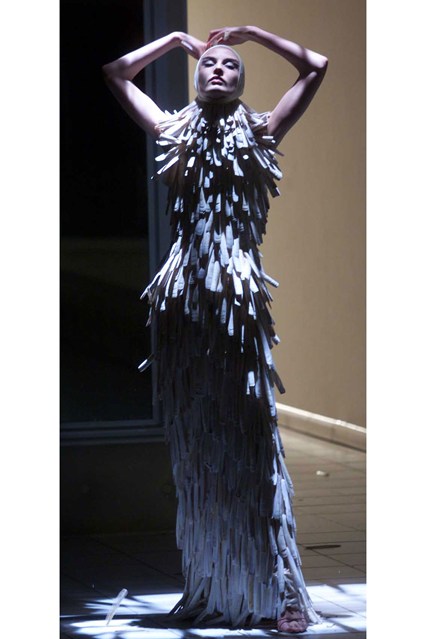 Fascinated by water and the sea, for his final collection 'Plato's Atlantis' McQueen  dreamed up hybrid beings made of scales and fins, as though humans were evolving to adapt to a post-apocalyptic waterworld of the imagination.  Far from hobbling his models, the infamous "Armadillo" boots with their massive heels and platforms elongated their legs and made them into towering but graceful alien forms, crowned with intricately braided or lobed hairstyles. 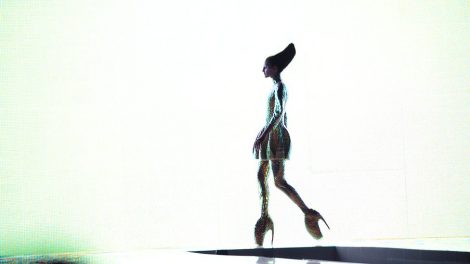 For me, the garments the models wore in this final creation were almost overshadowed by the overarching dream of  transfiguration; a brave new world that had such people in it.

In a society where "extremist" has become a bad word, Savage Beauty showed a whole world of extremes; of edges and borderlines dreamed by a man who was always pulling away from the here and now. On the wall in the exhibitions's final room were McQueen's own resonant words:

'There is no way back for me. I'm going to take you on journeys you've never dreamed were possible.'