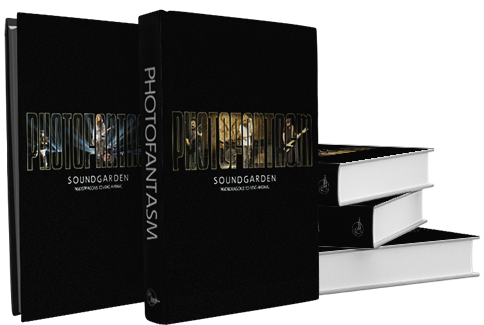 I've read a lot of books about music in my time, and I've got the groaning bookshelves to prove it. The worst of them are cold-hearted exercises in corporate PR, or pirated knock-offs thrown together to make a quick buck from fans with little regard for quality or originality.

Then there are the best of them: the labours of love written by people whose love for the music in question goes way beyond profit or logic.  Those who believe in it not simply as a product, but as art. Whatever the format, you can tell one of these creations a mile off.  Merri Cyr's glorious photographic love letter to Jeff Buckley, A Wished For Song, is one.   The vivid orange, 320 page "catalogue" which accompanied the V&A's 'David Bowie Is' retrospective is another.

Photofantasm deserves to be classed with these.

Jaye & Mike English's massive photobook (I weighed it - just shy of 7lb) is special not only because of its quality, but because of its provenance.  No professional writers or official photographers have been hired here to record Soundgarden's comeback for posterity. There are no interviews with the band, no posed studio shots, no corporate branding.  If Soundgarden ever decide to publish a book about their long career, that point is still some way off in the future.  Instead, Photofantasm draws on the most powerful and positive resource any band can have - its fanbase.  This book is by them, and for them. A magic mirror held up to the band by those who love it, reflecting and projecting. In many ways, it's simply a reply.

And what a reply the fans have put together.  Every show on Soundgarden's world tour since they made their reappearance in 2010 has its own section, bursting with reminiscence in words and images.  People tell their stories about the shows; the often epic travels as they follow the tour across continents, the sacrifices made (one fan sold his entire Soundgarden record collection to afford travel and tickets), the precious autographs and glimpses of the band backstage, the cameraderie of the queue for a place on the rail.

Every setlist is included, every local tour poster has been reproduced in full-page colour.  Fans with creative talent of their own - notably artist Photocoyote, American fan Jeff Becker and young Scottish fan Ruairdhri - have created new, specially commissioned original artwork which appears in the book for the first time.

Even when a few of Soundgarden's fellow travellers have been coaxed into contributing, they do so as fans of the band rather than industry professionals. Everyone from System of a Down's Serj Tankian and Korn's Jonathan Davis to Chris Cornell's own brother Peter is quoted about what the band has meant to them in the development of their own artistry, and there are some engaging behind-the-scenes anecdotes scattered through the text. Journalist Mark Yarm has written a foreword. A few pro photographers have contributed their own shots, although it's testament to the talent of the fans - most notably Jaye and Mike English themselves - that so many concert shots snatched from the crowd compare so well with work done from the photo pit.

But for all the fantastic photos this book contains (take a quick peek here), my favourite visual is actually verbal, from English fan and musician James Morgan, on 2012's open air show in Milan.   What can I say; I'm a writer.

Noting the full moon that had been providing a fitting backdrop for the concert so far, Chris Cornell looked to the sky, pointed, and addressed the crowd: "Look at the moon.  It understands everything about you. It's still trying to figure me out, but it's got you covered."

Vintage Chris. Do I have any criticisms? Well, yes. I wish every one of the 592 pages was clearly numbered, because I wanted to note down all my favourite bits and find them again quickly. But that's nitpicking. And there are worse ways of spending time than flicking idly through pages like these.

The limited edition book (1000 copies) is beautifully produced in hardback, printed on high quality photo paper in full colour with a sturdy sewn binding.  Basically, it's an heirloom - a beautiful collector's item that's come straight from the grass-roots and has no absolutely no profit motive. Yes, it's been made by amateurs.  But the word 'amateur' means "one who loves" - and only people with a profound love and understanding of their subject could even begin to make a book like this.

Last word: Photofantasm ends with a valediction and a memorial to Tiffany Patterson-Gross - a long-time fan who became Soundgarden's VIP guest at 2013's Seattle show shortly before she lost her battle with cancer. Proceeds from sale of the book go to help cancer charities in her honour. 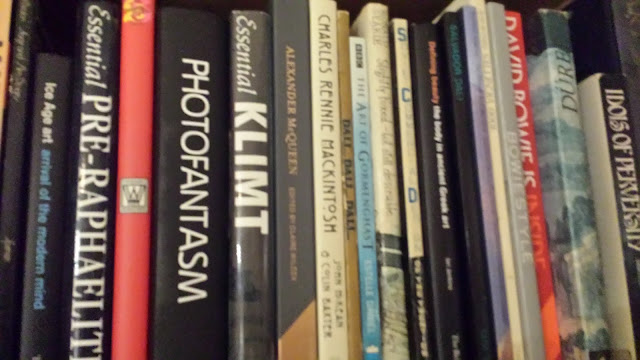