The current production of 'Hamlet' at the Barbican looks magnificent.The sets, the costumes, the vision; all are marvellous and the experience of the play offered here is spectacular.

But Hamlet is about language.

I don't mean the actual language of Shakespeare, the iambic dance of the verse, the four century old vocabulary that phases in and out of modern comprehension, the poetic reliance on imagery that is so much more important than the mechanism of the (borrowed) plot.  That's a common factor across all his work, his genius is based on it, and you either want to make the effort to understand it, or you don't. The crib notes, glosses and "translations" (No Fear Shakespeare, anyone?) which litter the internet might drag schoolkids through GCSEs, but ultimately they miss the point.

I mean it's about voices: ancient and modern, mad and sane, rational and mysterious; distinct and various registers of speech which descend on the characters of this passion play like enchantments or translation matrices, forcing them to speak in languages which are alien to their everyday selves: haunting soliloquy, mad scene, death scene.

Unlike some productions (notably Branagh's and Jacobi's) which have concentrated on external action, Lyndsey Turner's production feels firmly rooted within Hamlet's psyche.  His soliloquies take place outside normal spacetime -  Cumberbatch spotlit inside a kind of bubble, splashing around in existential angst while the everyday action of the court goes on in imperceptibly slow motion around him.

As the programme cover with its doppelganger child actors hints before we take our seats, Benedict Cumberbatch plays the prince as a man who doesn't really want to grow up.  In this production we first meet him sitting crosslegged on his bedroom floor, playing old records on a battered gramophone.  His father - the mentor he admires and loves - is dead, and his assassin has married his mother.  All kinds of Oedipal ferment has been unleashed; if Freudian psychology says a boy is meant to pass through a phase of wanting to kill his father and supplant him in his mother's affections, at least metaphorically, then in that sense Uncle Claudius has stolen Hamlet's thunder. 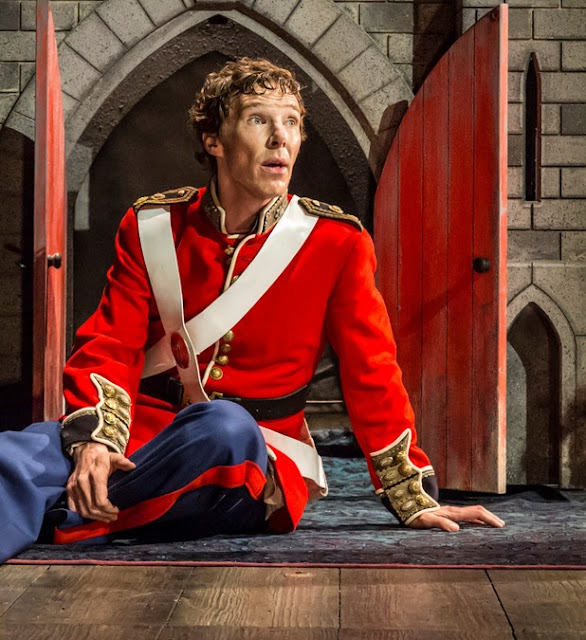 Cumberbatch's Hamlet  reacts to the trauma by regressing into childhood, diving into the nursery dressing-up box, playing with toy soldiers, breaking the rules of adult behaviour. His "antic disposition" is partly a way of  playing with the idea of himself as  a warrior in his father's image, or (in his interaction with the Players)  a Machiavellian strategist; but his rejection of Ophelia - petulant, here, rather than cruel -  plays into the idea of a man-boy who's still too close to his mother to be a husband himself.  His crucial scene with Gertrude at the end of the first half is really the psychological climax of this production of the play; having used the language of disgust to force his mother to look into herself and own up to her own sexual frailty, he also reveals the flaws in his own.

O Hamlet, speak no more!
Thou turn’st mine eyes into my very soul,
And there I see such black and grainèd spots
As will not leave their tinct. 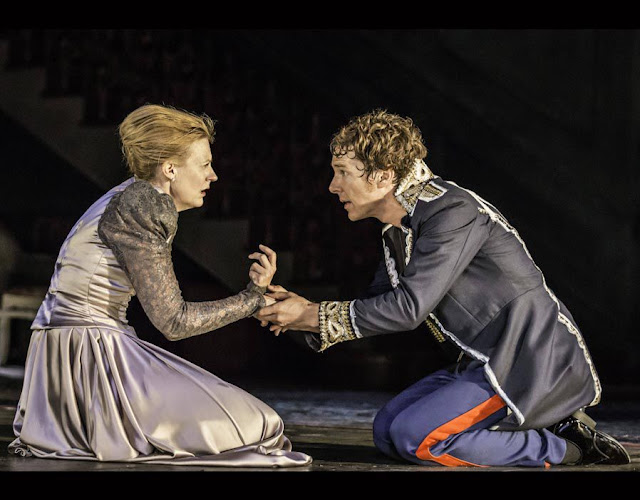 Angry at himself for revealing so much, he hits out wildly and kills an innocent.  Polonius dies, the walls of the castle fall; the windows shatter, and the stage goes dark. For good or ill, childhood is over.

Attempts at action always end badly for Hamlet. Whenever he tries to be  "a man"; live up to his father's ferocious medieval legacy by adopting the persona of the avenger, he also adopts a suitable dialect:


'Tis now the very witching time of night,
When churchyards yawn and hell itself breathes out
Contagion to this world. Now could I drink hot blood
And do such bitter business as the bitter day
Would quake to look on.

It's the sort of thing Macbeth might say. But underneath the would-be warrior lies the manchild who fears not only his own indecision but his own dubious motivation.

Soft, now to my mother.—
O heart, lose not thy nature, let not ever
The soul of Nero enter this firm bosom.
Let me be cruel, not unnatural.


These words are ambiguous when we consider that not only did Nero murder his mother, but was suspected of committing incest with her.


After the first half's explosive finale, the characters are left to thread their way disconsolately over the rubble and broken glass which strews the stage. Hamlet's momentary lack of control has burst the dream open, leaving Denmark to rot in the aftermath.  Here, the production reveals some of its weak points.  Ciaran Hinds makes a low-key Claudius, neither noticeably wicked nor especially contrite.  We wonder how he can have gathered together enough gumption to kill the king and marry his widow. There's no real outrage in his reaction to the Players, no sense of struggle in his chapel confession scene.  His language of confession pays mere lip service to the concept; redemption is simply unavailable. In the second half of the play, his plot against Hamlet feels exactly that; a plot device, empty of emotion.

My words fly up, my thoughts remain below:
Words without thoughts never to heaven go.

Ophelia wanders amidst the rubble like a refugee, her home in ruins like her mind.  She is literally displaced; her wits, as Hamlet says, are mortal and when Gertrude tells the news of her death we are already inside an extended death rattle for the world as these people have known it.  Duels notwithstanding, Hamlet has no power to stop the process.  Inevitability takes over, Fortinbras's forces advance, the endgame approaches and Elsinore, littered with the bodies of its people, dissolves into the landscape. 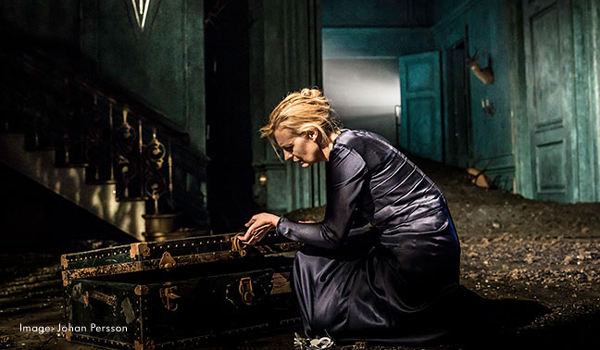 It's a spectacle, a feast for the eyes, and Benedict Cumberbatch is extraordinary in it; simultaneously subtle and powerful, nobly commanding and pitiably immature, bringing psychological nuance and dangerous physicality to a role which can sometimes reduced to a kind of  decadent fin de siecle aesthetic or bashed away at like an obstacle to be overcome (Mel Gibson, I'm looking at you here).  The rest of the cast do a workmanlike job at best, though Anastasia Hille as Gertrude brings warmth to an often unsympathetic role and Sian Brooke's Ophelia is moving in her pathos.

But in the end, Cumberbatch outshines the rest of the cast because his Hamlet is far and away the most intelligent interpreter of the play's language, and language is what Shakespeare is all about. It's where the magic lives. That's why when he dies, the rest is silence.