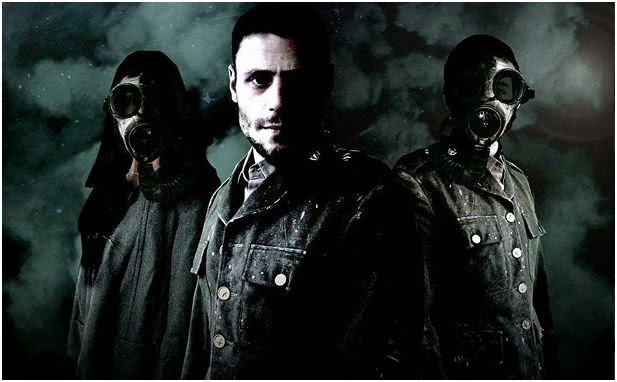 Macbeth is staged as part of The BunkerTrilogy, which also takes in versions of Greek myth Agamemnon and the Arthurian cycle story Morgana.  Just an hour or so long, it takes episodic elements of the Shakespeare tragedy and transplants them into the trenches of World War I.

The real star here is the set – a smoky, brillianthly-realised dirt-floored bunker into which the audience squeezes to sit on low benches while the action takes place inches from their noses.  The effect of the drama at such close quarters is devastating, although those with bad backs or particularly long legs should probably give this one a miss.

Sam Donnelly as Macbeth gives a a powerful performance, playing the tyrant as an bealeaguered officer torn apart by paranoid nightmares as mustard gas swirls and puttee-clad witches in gas masks deliver their prophecies.

At times the drama seems to want to escape the confines of its setting, and I wonder whether the Greek and Celtic myths might have adapted rather better to this treatment than the more structured plot of the Shakespeare play. So much is cut that the narrative barely makes sense, though the play is so well-known that this doesn’t matter as much as it might. This is a nightmare ghost of a play, a fever dream experienced in extremis.
Posted by clarefromscotland at 06:32