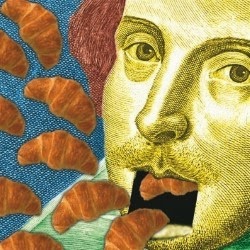 We took our leave of Edinburgh on our last morning at the 2014 Fringe with Shakespeare For Breakfast, a truly hilarious but wholly affectionate skit on Shakespeare’s language, plots and characters.  C theatres mount a comedy production under this title every year at the Fringe, and this year’s was a riot.

Modern-day lighting tech Steph finds herself magically transported to an island disguised as a boy called Steve, where she meets a whole cast of warring characters, some of which are plotting to kill their maker. Prince William lookalike Henry V wanders on in a pair of Union Jack shorts; Hamlet is a moody teenager in a hoodie punching “To be or not to be #goodquestion” into his iPhone.

There’s much punning humour (Ariel from The Tempest is “the font of all knowledge”), gender confusion and doubling up of roles from the small but endlessly energetic company, and of course it all turns out all right in the end with a double marriage.  And you get coffee and croissants as well!!
Posted by clarefromscotland at 06:58